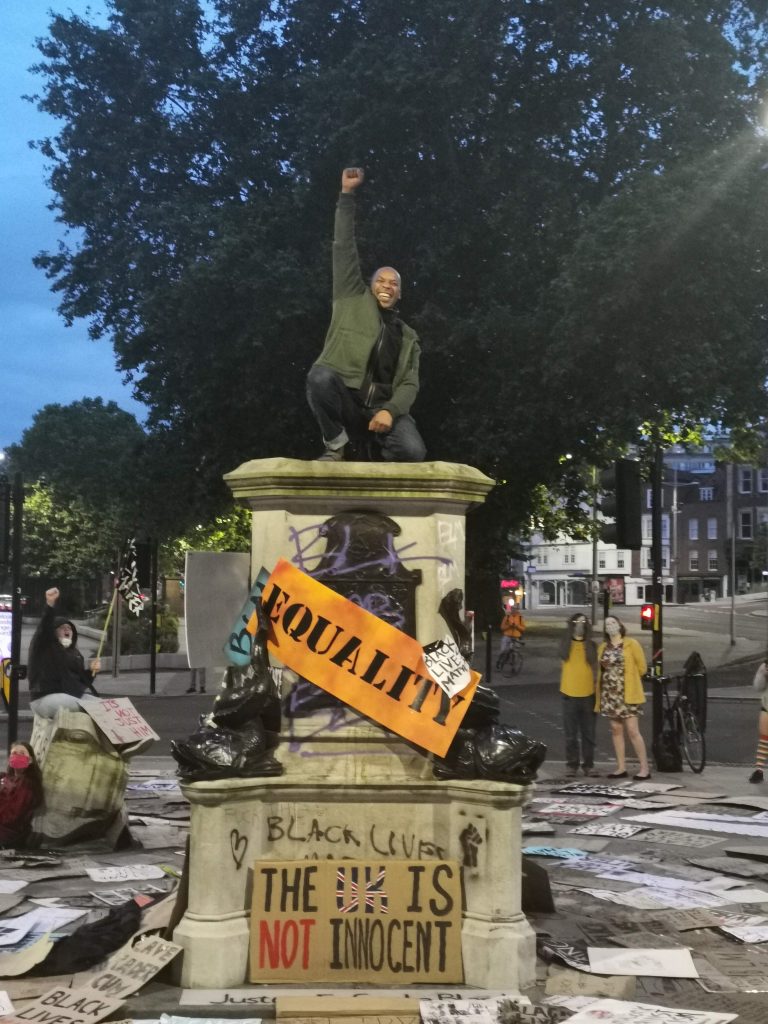 After the statue of Edward Colston was toppled, (surprisingly easily!), it was then dragged down the city centre road and pushed into the River Avon next to Pero’s Bridge, (which is named after an enslaved African). Very fitting.

I wasn’t able to join the march as I had family members recovering from Covid19, and couldn’t afford to get ill myself, but so glad to see the scenes almost live through social media. After doing countless projects, films and writing academic essays relating to Colston and the statue over the past 20 years, (my most recent journal article on the issue was published last year (1), saying it should be removed), seeing the footage of the statue being toppled gave me goosebumps.

I did go and see the empty plinth that same evening, with my colleagues Rob Mitchell and Louise Lynas, my co-directors of Firstborn Creatives production company, (which me and Rob founded). Over the past 20 years we at Firstborn have produced a large amount of projects relating to the slavery connections with Bristol, the issue of the Colston statue, including television two documentaries, a book, a million pound exhibition, and countless educational media projects. Our very first production was a the tv documentary ‘Under the Bridge’ for HTV, which I directed, and Rob presented, which looked directly at the issue of the Colston statue, and calls for its removal. So it was fitting on that evening, seeing an empty plinth where Colston once stood, that Rob jumped up there, and I was behind the camera. This photograph I took ended up going viral online, and I’m proud that it is now in the Bristol Museum & Art Gallery collection as a record of this momentous occasion.

I didn’t actually imagine the statue would fall that day, not sure it even crossed my mind, but seeing the footage it made sense it happened. This is 2020, of course it would happen!

2020 has seen change come upon us at a rapid pace, whether we like it or not, many things have changed, some things good, some things not so good. The things that are good, it is now up to us to work on how those changes will become permanent, not temporary.

2020 really is full of surprises. I’m not going to pretend I saw any of this coming, as I didn’t. What will happen in the next episode, and who is writing the storylines, and who is documenting it for future history?

Yet the question still remains, What Next?